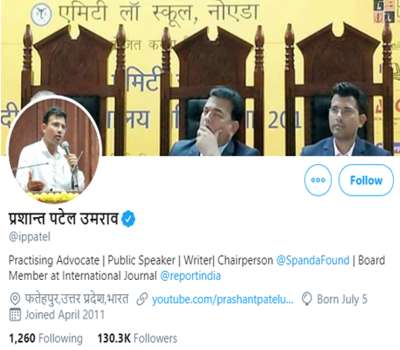 One such user on Twitter is, Prakash Patel Umrao from Fatehpur, Uttar Pradesh, who goes by the username @ippatel. The description of his profile says that he is a practising advocate, public speaker, writer, Chairperson of Spanda Foundation and Board member at a journal called Ground Report India.

His profile can be accessed at the following link: https://twitter.com/ippatel

The most alarming aspect of his profile is the Tweet pinned on his timeline.

Translation of the tweet: Iqbal Khan, aged 17, committed rape on a 7year old daughter of Ajay Sharma hailing from Bihar in Vikas Nagar of Ranhola Police station area of Delhi, the girl used to address him as “bhaiyya” (brother) and now she is in a critical state in the hospital. Such operations of Masjids (mosques) and Madrassas could cause destruction of entire humanity.

He has posted a news article from “Breaking Tube” and in that post, there is a picture of a juvenile who is allegedly a delinquent who is said to be in conflict with law. While the face of the survivor is blurred, the picture of the alleged juvenile delinquent is displayed clearly. The user is a lawyer and is naturally aware of the law pertaining to protecting the identity of a juvenile as per the provisions of the Juvenile Justice (Care and Protection of Children) Act. Section 74 of the said Act says that “no report in any newspaper, magazine, news-sheet or audio-visual media or other forms of communication regarding any inquiry or investigation or judicial procedure, shall disclose the name, address or school or any other particular, which may lead to the identification of a child in conflict with law or a child in need of care and protection or a child victim or witness of a crime.” But the user seems to be so engrossed in his desire to spread hatred against the Muslim community that he has completely ignored the law and Twitter has gracefully obliged by keeping the tweet on display.

Another Twitter user, PrateekSinha (@free_thinker) called out Twitter for its feeble policy against hate content and said that it has to be assumed that Twitter supports such content because it helps their platform grow. According to PrateekSinha, Prashant Patel’s tweets have had an underlying tone of pitting Hindus against Muslims and many of tweets have been provocative and inflammatory and speak about calling for mass-murders of

Here are a few examples of the hate filled speeches of Prashant Patel Umrao:

1.  (Link has not been found for the tweet below)

Translation: Right from Mohammad Azharuddin to Mohammad Shami India is witness to history of match fixing in Indian cricket

Some of his tweets have been deleted by twitter but are still accessible in Twitter’s archives which means they are still available and accessible online for people to read: