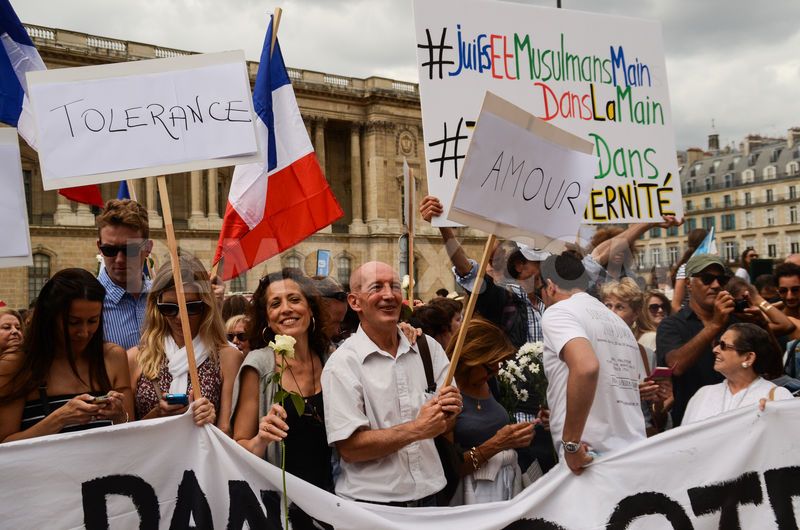 Making twins out of synagogues and mosques: The Foundation for Ethnic Understanding

At a time when many have despaired of hope for Jewish-Muslim understanding due to the ongoing impasse in the Israeli-Palestinian conflict, nearly 200 Muslims and Jews gathered in Paris recently to say: “Now is the time to build ties of friendship and understanding between our faiths for the sake of our children and children’s children.”

A mixed audience of rabbis, imams and Muslim and Jewish activists from around Europe and the United States gathered on the evening of December 8 at the glittering City Hall of the 16th arrondissement to hear this inspiring message of hope at the first annual dinner gala of the Jewish-Muslim Friendship Society of France (AJMF).

The keynote speaker at the event was Rabbi Marc Schneier, president of the New York-based Foundation for Ethnic Understanding (FFEU), which is working to create a worldwide movement of Muslims and Jews committed to communication, reconciliation and cooperation. He praised the pioneering work of Rabbi Michel Serfaty of the AJMF, which last month brought together 30 mosques and 30 synagogues in France to take part in the FFEU-sponsored 2nd Annual Weekend of Twinning of Mosques and Synagogues across North America and Europe.

The programme, which began on November 13, 2009 and continued through the end of December, involved 120 one-on-one “twinning” events between mosques and synagogues in the United States, Canada and eight European countries.

Rabbi Schneier spoke of the efforts of Rabbi Serfaty and AJMF, which for the past five years have sent a coterie of activists on a “Tour de France” bus trip to communities across France and nearby countries where Muslims and Jews live in uneasy proximity and where many attacks against Jews have taken place, in order to open lines of communication and combat fear.

He said, “At a time when the conventional wisdom says that our two peoples must live in perpetual conflict Rabbi Serfaty and the AJMF are showing that there is another, much better way. We are gratified that this is happening not only in France, where conflict between Muslims and Jews has been especially intense, but across North America and Europe as well. In the spirit of Chanukah [better known as Hanukkah], let us keep aglow the light of caring and understanding and allow that light to guide the reconciliation and cooperation of Muslims and Jews worldwide, including [in] the Middle East.”

The gala was co-sponsored by the Representative Council of French Jewish Institutions (CRIF, an umbrella body of French Jewish organisations), the Great Mosque of Paris and the Rabbinate of Greater Paris. Attending the gathering were top leaders of the European Jewish Congress and European imams and rabbis from France, the United Kingdom, Italy, Switzerland, Germany, Holland and Belgium, who previously held successful Weekend of Twinning events in their respective countries.

The event was both a celebration of what FFEU and its European partners have accomplished together during the past year and an opportunity to chart future FFEU work with Jewish and Muslim leaders in the years ahead.

Rabbi Schneier sees Europe as a vital region in the global initiative by Muslims and Jews dedicated to communication, reconciliation and cooperation: “We have begun a process that defies some common stereotypes yet represents a rising tide of grass roots sentiments in both the Muslim and Jewish communities worldwide.”

Noting that FFEU’s outreach has helped to trigger a significant warming of Jewish-Muslim relations in France, which had deteriorated to a dangerous degree in the wake of the 2009 Gaza war, Rabbi Schneier said, “We hope to be able to achieve similar results in other important European countries like Britain, Germany and Italy in 2010.”

(The Foundation for Ethnic Understanding, www.ffeu.org, a non-profit organisation under the leadership of Rabbi Marc Schneier, president, and Russell Simmons, chairman, is dedicated to promoting racial harmony and strengthening intergroup and inter-religious relations.)