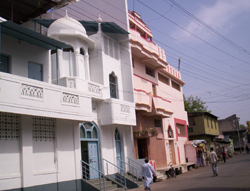 Lessons in harmony from a Malegaon neighbourhood

Malegaon, a town in India where Muslims constitute more than 70 per cent of the population, has always been considered a communally sensitive place. But there is an area in Malegaon where a mosque and a mandir exist side by side and where both Muslims and Hindus have been living in peace for several years. This, in fact, is true of the entire town. Except for a select few who always try to create trouble, the whole town is comprised of peace-loving people. And yet the town has earned the tag of being a communally sensitive place.

My mohalla, or locality, is called ‘Qila’ because of the historic 17th century fort that lies within it. Many Hindu and Muslim families have been living here peacefully ever since it was built, living in harmony and helping each other out whenever the need arose. A few steps from this historic fort lies an akhada, an ancient Indian gymnasium. The akhada was jointly managed by Hindus and Muslims and even now has some Muslim names on its managing body.

Sometime in the 1930s, when a masjid was built adjacent to this akhada, a mandir was also constructed alongside. This was enough to make the mohalla into a symbol of Hindu-Muslim unity. Even today Hindus and Muslims pray together at their respective places of worship, mocking all those who call Malegaon "a communally sensitive place".

It is not clear why the area, which was supposed to be a symbol of Hindu-Muslim unity, came to be considered a communally sensitive one. This is particularly surprising given the absence of a single incident, arising from the proximity of masjid and mandir, which has caused communal disturbances.

I still remember the Ganpati and  Shiv Jyanti processions passing through my Mohalla on marvelously decorated trucks. The battery system that prevails today was nowhere in practice at that times and trucks after the trucks in the procession used to take the electricity connections from my house every year.


As I grew older, it gradually occurred to me that it was because a masjid and a mandir existed side by side that my mohalla was considered a highly sensitive place. But believe me, despite all this hype about the so-called sensitiveness of the place, I seldom noticed any tension between the two communities in my neighbourhood. Not even when the rest of Malegaon witnessed several riots. People in this mohalla have always maintained peace and lived in remarkable mutual respect and understanding.

If this were not true, how was it that water from the tanks at the masjid were routinely used when the expansion of the mandir was recently underway? What’s more, I still remember the Ganpati and Shiv Jayanti processions that passed through my mohalla on marvellously decorated trucks. The battery operated systems that we see today were not in use then and truck after truck in the procession ran electrical connections from my house. Likewise, others in the mohalla too did not hesitate to lend a helping hand.

Forget the daily excitement of prayers five times a day which a Muslim in the mohalla offers concurrently with fellow Hindus performing pujas. The festival season, which normally begins with the Ganpati festival in August, so enlivens the atmosphere of the mohalla that it remains memorable for the whole year. The lighting, the decorations and the huge pandals is all very mesmerising. The muezzin bellowing the azan, the call for prayer, and the simultaneous chanting of bhajans by the pandit and his fellow mates, all this is nothing short of thrilling.

But despite the peace and harmony that people in this mohalla live in, the policemen are normally here as usual. And when my two-year-old son asked me why policemen are seen around our mohalla I, unlike my father, had no answer.