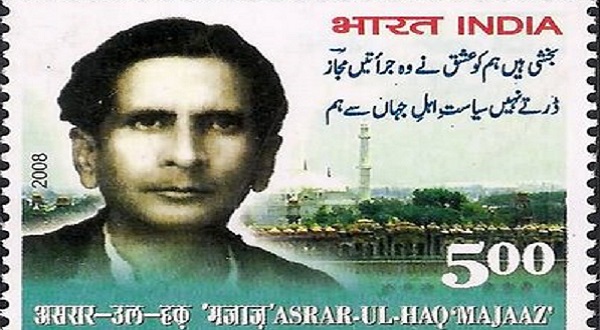 In India’s brahminised concept of secularism it was inevitable that a little noticed five rupee postal stamp issued on March 28 to celebrate the anti-imperialist, anti-capitalist Urdu poet Asrar ul Haq Majaaz showed his handsome visage superimposed on the picture of a mosque.

The fact is that Majaaz, a renowned romantic and agnostic, had as little to do with a mosque as his contemporaries like Faiz and Josh or Ghalib and Mir who preceded them by well over a century. But the dominant semi-official formula – Urdu equals Muslims equals mosques – is not unique to India alone.

Early protagonists of Pakistan fell into the trap until Bangladesh happened and, at great cost, showed up their mistake. However, even if for the wrong reason, Urdu has at least been saved in Pakistan from the slow extinction it has been subjected to in India. Last week, thanks to the rare effort of its scholarly vice-chancellor, the Jamia Millia Islamia in Delhi unveiled a conference hall named after Mir Taqi Mir.

The complex has a room dedicated to the memory of the matchless Marsiya writer Mir Anis. What becomes of these facilities eventually is for the future to tell. The last time I heard of it, the spot in Lucknow where Mir’s grave would be stands dissected by a railway track.

It would be well-nigh impossible for us to locate Ghalib’s grave in Delhi but for the efforts of filmmaker Sohrab Modi who built a simple marble tomb over the place near the Hazrat Nizamuddin shrine, rescuing it from the squatters and stray animals that defiled it. To mark his centenary some years ago, Ghalib’s famous haveli in Gali Qasim Jaan of Old Delhi was cleared of the coal depot it had become. Though a public telephone stall still operates from within its precincts, at least his countless lovers can make their pilgrimage to the fabled narrow lanes and an aesthetically restored haveli.

But perhaps I am complaining too much. After all, the modest philatelic event for Majaaz was an uncommon official gesture in the service of Urdu literature, a language shunned, I suspect, because it embarrasses freed India’s comprador administrators. After all, Urdu encompassed a culture of resistance to man’s enslavement by man, intense love and passion, eclectic mysticism, full-blooded hedonism, unrelenting anti-imperialism and a defiant conversation with god and the mullahs when necessary – mullahs who were more often than not depicted as dishonest agents of religious lottery.

The new Indian state connived with the mullahs to throttle Urdu and to turn it into a language of their prescriptive religious seminaries. That’s how the unstoppable Sahir Ludhianvi was compelled to observe the state of affairs bluntly amid the official Ghalib celebrations: Ghalib jisey kehtey hain, Urdu hi ka shayer tha Urdu pe sitam dha ke Ghalib pe karam kyun hai? (Ghalib was an Urdu poet, his muse you’ve all but killed, Celebrate him but destroy his language? Is that what he willed?)

So 52 years after Majaaz was picked up on a freezing winter morning from a country liquor shop in Lucknow, this full-blooded agnostic was declared a religious Muslim in the Indian capital by sheer innuendo. He possibly lived for a few hours more after being rescued by a passer-by but the end came soon enough (either of pneumonia or was it cirrhosis) at Lucknow’s Balrampur Hospital. The tragic news spread to the far corners in an instant thanks to the sway that the Progressive Writers’ Association held over much of India those days. Majaaz was the group’s most beloved and most tragedy-prone member.

Showing Majaaz with a mosque is a metaphor not unique to him. The Congress leaders had successfully belittled Mohammad Ali Jinnah when they overlooked his impeccable liberal credentials and painted the giant national leader as a smaller representative of Indian Muslims.

The dangerous ploy boomeranged hard when Jinnah did become a leader of Indian Muslims. Would the Government of India bring out a stamp on its best known icon of liberal ideals, Jawaharlal Nehru, with a Hindu shrine in the background even if he may have visited the most splendorous temples in southern India? I am pretty certain they dare not. They know that images carry far more loaded meanings than words can ever convey.

Aligarh University, where Majaaz studied, is not about mosques alone, as the stamp tries to suggest. It has the beautiful British-built Strachey Hall and countless other secular symbols. The university reminds me more of great historians like Irfan Habib, progressive writers like Jazbi and Sardar Jafri and, of course, Majaaz and more recently, Shahryaar, an excellent Urdu poet doomed to be known as the fellow who wrote lyrics for a movie about a famous courtesan.

Let me quote a poem by Majaaz to illustrate why the mosque was the wrong symbol for him. He wrote Khwaab-i-Sahar in 1939, the title of hope suggesting that morning dreams often come true. The poem is mostly about man’s exploitation by vendors of religion. A few relevant lines go thus:

(The mullah and the pandit and their ceaseless sermon

Man bowed before each one of them but did he learn

Their religions, mostly ruses for plunder turn by turn.)

Its peculiar association with South Asia’s Muslims has accompanied the virtual dismemberment of Urdu in India. This shows insensitivities on two counts. First, it is unfair to South Asian Muslims of other hues such as Tamil, Malayali, Telugu, Konkani, Gujarati, Bengali, Baloch, Punjabi and Pashtun among others. Secondly, the approach insults the invaluable contribution of Hindu and Sikh writers of Urdu such as Brijnarayan Chakbast, Premchand, Firaq Gorakhpuri, Upendranath Ashk, Rajinder Singh Bedi, Krishan Chander, Malik Ram and Ram Lal. There were notable Anglo-Indian Urdu poets too.

Releasing the stamp, Indian Vice-President Hamid Ansari described Majaaz as a revolutionary poet whose writings impacted an entire generation: "His poems were full of romance and revolution." From the corner of the stamp, Majaaz appeared to mock the proceedings where he must have spotted nephew and film lyricist Javed Akhtar and sister Hameeda Salim. In a message scribbled in Urdu, the dying language of India, Majaaz laughed:

(Unalloyed love gives me a potent elixir that I can dare

The politics, the cunning intrigues of life everywhere.)