Skip to main content
Sabrang
As the idea of a unified, secular India appears to be giving way to a divided and polarized one, the art of the past sends a special message: that India’s greatest artistic achievements arise out of inclusiveness, not division. Painters, musicians, dancers, writers, poets, textile-makers, builders, metal and stone workers, jewelers, cooks and other creative individuals have knitted India together over centuries, creating a fabric that reflects a blending of faiths and regions, and many foreign influences.

Here are five masterpieces of the Mughal period to reflect upon. In doing so, lets ask the question:

Do we prefer the inspiring vision of India they provide, and celebrate the cosmopolitan reality that produced these treasures, or do we accept the intolerant and provincial alternative that is unfolding?

The claim that India is a monolithic culture, as reflected in some imagined past, is belied by centuries of artistic production.  The Mughal period brought together talented artists from all regions and religions together to create extraordinary works of art. In their time these works of art provided pride, pleasure and education to their viewers. It is hoped that they will do so again here. 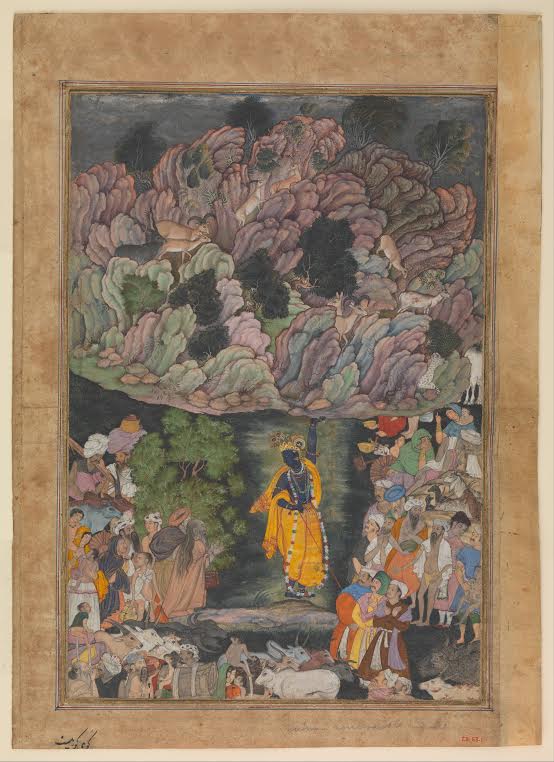 In 1574 the Mughal emperor Akbar (reigned 1556-1605) created a bureau of Records and Translation at Fatehpur Sikri. The aim was to translate important texts, including Hindu epics, into Persian and to illustrate them in the royal workshops. In order to accomplish this task, scholarly Mullahs and Pandits collaborated over a period of several years as Sanskrit texts were reborn in Persian – the Mahabharata became the Razmnama; the Vishnu Purana and Kathasaritsagara were translated; and four illustrated versions of the Ramayana were made -  three for different members of the Mughal royal family and one for a Rajput ally.

For the artists at the Mughal court  (which included Muslims, Hindus, Europeans and women painters) illustrating these manuscripts posed a special challenge because this was an almost entirely new type of imagery. For example, there is no surviving evidence that the Ramayana was illustrated in manuscript form before the 16th century, so many of these paintings are innovations of the Mughal period.

One masterpiece from the Harivamsa depicts Krishna lifting Mount Govardhan to protect the villagers of Braj from the wrath of Indra (see illustration). At the very center of the painting stands the blue god, executed in the naturalistic Mughal style, but also bearing his attributes of blue skin, vanmala and peacock crown. The mountain above is painted as a mass of stylized rocks, derived from Persian, and ultimately Chinese, painting, and is filled with plants, birds and animals. Clustered below are the villagers of Braj, along with a trio of Mughal courtiers. Among the old men, sadhus, young boys, and women, one female figure on the right is loosely based upon a European print image of the Madonna. Of equal interest is the group of cows in the foreground that are painted with great sensitivity and individualization. While temple sculpture of the period tends to show Krishna using his little finger to lift the mountain, in this painting he performs the miraculous act with the flat of his palm. This small but significant detail shows that the unknown artist was in line with the earliest iconography of this subject, such as in the relief carvings at Mahaballipuram (7th century AD). The miracle of this and other such works of its kind reflect a simple fact – that Muslim patronage was a vital key to the development of Hindu religious painting.

Meeting of a Muslim and Hindu pilgrim
Folio from the Khamsa of Amir Khusrao Dehlavi,
Mughal school, late 16th century, by Basawan 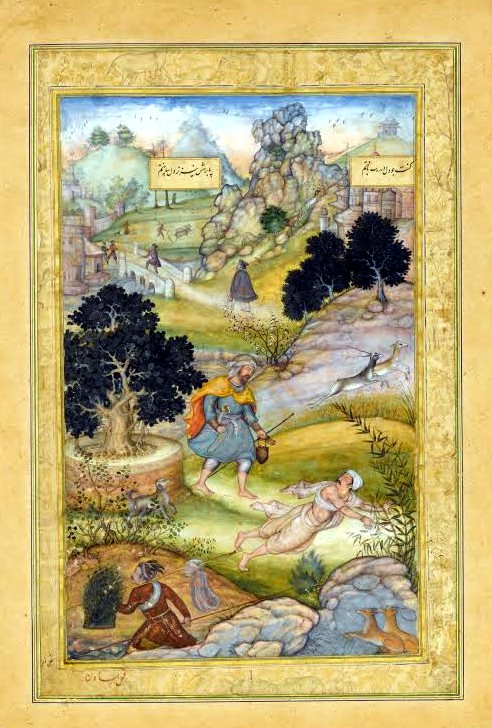 The verses of the 13th century Sufi poet Amir Khusrao were illustrated in the late 16th century at the Mughal court. Among the exceptional artists involved in the project was the master Basawan, who is one of the talents named by Abu’lFazl in his famous chronicle, the ‘Ain-iAkbari. Here Basawan has depicted a tale where a Muslim pilgrim meets a Hindu Brahmin. He asks the Brahmin why he is crawling on the ground who replies that he has turned his heart into a foot and travels upon it in devotion to his deity.

The Muslim pilgrim is so impressed by this show of piety that he removes his own shoes to continue barefoot on his way. Basawan was one of the first Mughal artists to be deeply interested in the European styles of shading, modeling and volume, techniques which can be seen in this painting. The inscriptions visible on the page are by the hand of another Mughal master – the calligrapher Muhammad Husain Kashmiri, whom Akbar titled ‘Zarin Qalam’ or Golden Pen, for his beautiful handwriting.

So we see again a coming-together between Muslim and Hindu on every level, from patron to writer and artist to calligrapher to have made this work possible. How appropriate, especially for a story that essentially is a metaphor for the meeting of Islam and Hinduism in the subcontinent. 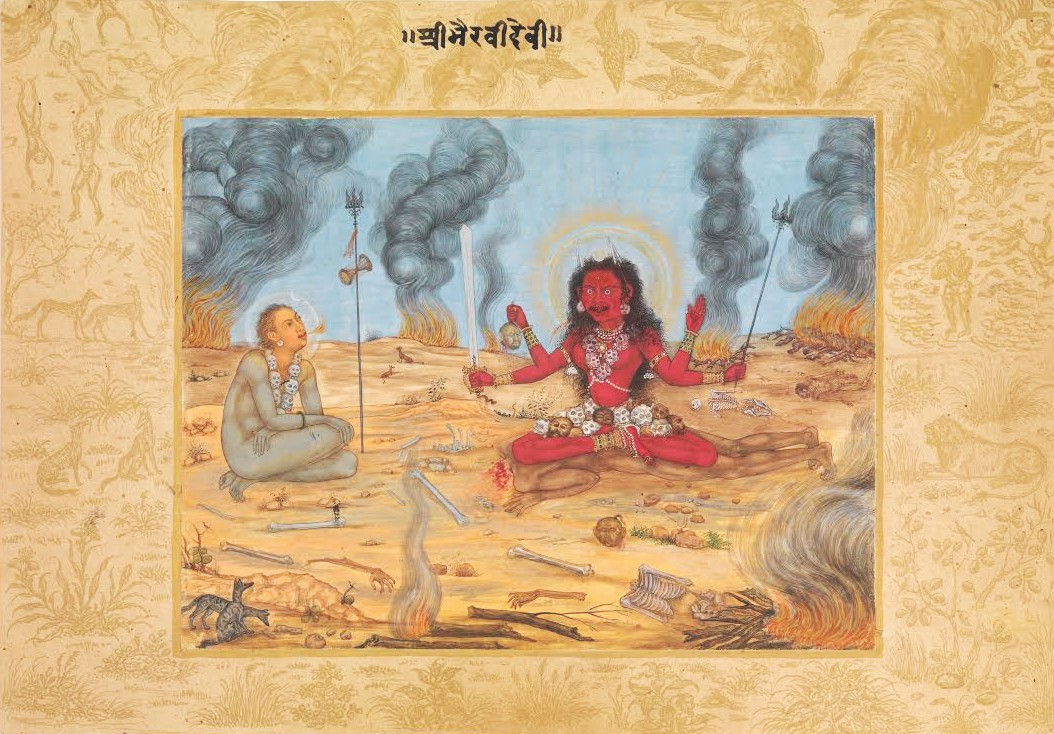 The tradition of illustrating Hindu subject matter at the Mughal court continued through the 17th century and from the period of Shah Jahan (reigned 1628-58) another great painting survives, attributed to the Mughal master Payag in about 1630 (see illustration). The subject is the fearsome Devi Bhairavi, shown here in a cremation ground, with Shiva appearing as an ash-covered devotee. Seven funeral pyres burn around, and jackals edge close while the ground is filled with human bones and corpses. The devotee expels a fiery breath, possibly to indicate a mantra, while the goddess herself spews blood, wears skulls, and also varieties of Mughal-style jewelry.

Remarkable for its conceptual depth and iconographical sophistication, close study of the painting has revealed that Payag relied in part on 17th century European images of the Crucifixion to create the scattered bones in the landscape, and also to create the naturalistic modeling of the figures. The image of the Devi herself may have evolved from an early Mughal illustrated Devi Mahatmya series, although here the rich detail of the iconography is unprecedented. This painting was likely made for Shah Jahan as a gift for the Hindu ruler of Mewar, to which collection it later went and where it got its visible Devanagari inscriptions. This particular goddess is among the rarest images of the Hindu pantheon, yet has emerged in full force at the Mughal court.

The beautiful flower at the center of this kalamkari tent panel of the late 17th century is an imagined plant, as demonstrated by the different blossoms and leaves which grow out of the same stalk (see illustration). This sense of fantasy and imagination is a hallmark of the Deccan schools of art, which flourished under the patronage of the Sultans of the Deccan courts of Bijapur, Golconda, Ahmadnagar, Bidar and Berar. But they were not the only rulers who patronized the great painters and textile dyers of the region. The Mughal and Rajput nobles, perched in the northern Deccan from the early 17th century in their bid to conquer the region, also employed kalamkari textiles as clothing, furnishing and tent panels, such as this example. This panel was once part of a tent made for Mirza Raja Jai Singh of Amber (reigned 1622-67). His Rajput kingdom, along with many others, was part of the extended Mughal empire. This composite, multi-cultural and multi-faith alliance was poised, under the command of emperor Aurangzeb, to conquer another, equally diverse group of Muslim kingdoms in Deccan India, which they succeeded in doing by 1687.

The styles of art of this period speak of this mix of Mughals, Rajputs and Deccanis. Here the flower is shown beneath a cusped arch with Chinese-inspired clouds in the sky.  The idea of such ornamental flowers took shape in the Mughal world where by about 1640 such motifs were found all over architecture and decorative objects, including in the Deccan and Rajasthan. Not only did Mirza Raja Jai Singh purchase such kalamkaris (as indicated by the Amber toshakhana inventory notes on it and on many examples in Jaipur) but his memorial in the Deccan where he died is executed in the same Mughal inspired aesthetic that we see in this piece. The language of ornament and artistic styles was thus shared across communities, and stands in marked contrasts with the prejudices and preferences being expressed today.

Aurangzeb on a Palanquin in the Deccan
Mughal School, about 1700, byBhavanidas 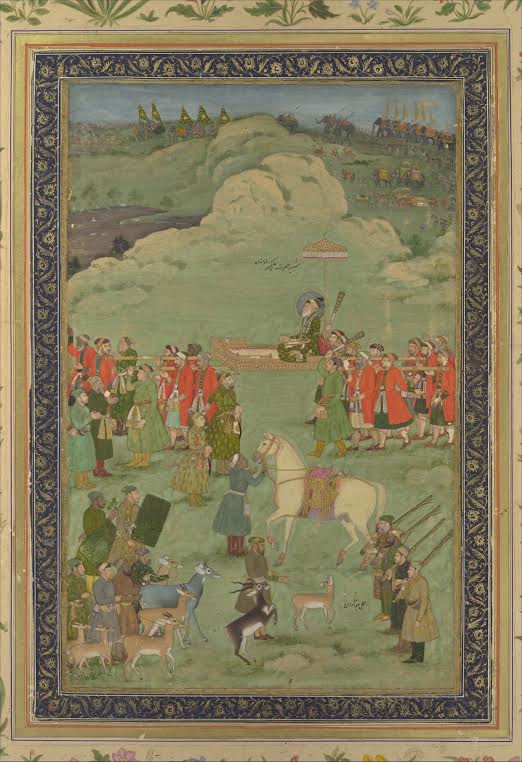 The Mughal emperor Aurangzeb (reigned 1658-1707) spent the last twenty-five or so years of his life in the northern Deccan, bent upon conquering the Muslim sultanates of the region. He finally succeeded, but he was already an old man by the time he did. This painting by the Hindu artist Bhavanidas portrays him on a palanquin in an open landscape with a royal army in the distance (see illustration). The dramatic hills in the background indicate that the setting is the Deccan, which has a distinctive rocky terrain in some areas. The emperor himself sits on a palanquin which is carried by attendants and also noblemen.

Paying homage to him are noble figures among them probably his son and successor, Bahadur Shah I and his grandson. In the very front of the painting we see preparations for a shikar or royal hunt, with a party of huntsmen dressed in green. While the painting contains visible ink inscriptions in Persian giving the name of the painter Bhavanidas, the artist has also hidden his signature (also written in Persian) in a tiny gold inscription in the green ground, as was often done by Mughal artists.

This important work shows the production of painting in the late Aurangzeb period – one of the most distorted and misrepresented periods of Indian history today. It also demonstrates that the mature style of the period had evolved to encompass historical subjects, observation of daily life, the imperial image, and human portraiture, all of which can be seen here. Bhavanidas continued working in the Mughal atelier until 1719, after which he moved to the Rajput kingdom of Kishangarh and became its premier artist. The famous development of bhakti themed paintings at that court would not have been possible without the Mughal input from artists such as him.

Thus the creative energy of art emerges from the combination of forces, not their separation – a profoundly important message that is deliberately being forgotten today.  The political obsession with a singular identity based on an assumed idea of purity rests on a falsehood about India’s historical past.  The world has witnessed such impulses before and the effects have been devastating.  In India’s case, the loss would be nothing less than the obliteration of its multifaceted and rich culture and history, to be replaced by a fictive distortion of what India was and ought to be. It is hoped that these masterpieces from the past inspire us to remember where India’s greatness lies.

(The author is a historian of Indian and Islamic art. This article is available in five Indian languages with links to high-resolution images of the works of art in on-line versions of the piece)